Podiatry and healthcare have evolved over years and years of research and advancements in technology.

As with anything, there are ‘fads’ in the health and fitness industries. Many years ago before I was studying to be a podiatrist I remember ‘barefoot running’ was the Answer to all of your aches and pains. This was made popular by a guy name Chris McDougall who wrote a book called ‘Born to Run’. The book highlighted the Tarahumara Native Mexican tribe in the Mexican Copper Canyons. After being repeatedly injured as a runner himself, McDougall was amazed at the tribe’s ability to run ultra distances (over 100 miles) at incredible speeds, without getting the routine injuries of most American runners would get.

The podiatrists in America at the time did not like the idea of this. Every man and his dog decided to start running barefoot. It was a disaster, people were getting injured just as much, if not more from barefoot running.

So you’re expecting me to say that being barefoot is silly. Well no, I actually think people were meant to be barefoot or at least wearing shoes shaped like your feet.

Below is a picture of the world’s first ‘leather shoe’. This was made over 5000 years ago. They are shaped like your feet, nice and wide at the toes. Nowadays, one of the causes of many foot problems is tight, stiff shoes.

The human foot comprises of 25% of the bodies muscles, has 26 bones and 33 joints. It was made to be mobile.

Spending years in traditional footwear with built up arch support, thick cushioning and a narrow toe box changes the structure of our feet and causes them to become stiff and weak. A big part of the barefoot solution to resolving foot problems and preventing them in future is switching to barefoot footwear that lets your feet become mobile and strong again.

There are many applications where I believe being barefoot would be awesome! How good would it be to walk around the office with no shoes on! But with our culture, it wouldn’t be seen as acceptable.

There are applications where I wouldn’t think about going barefoot. I wouldn’t run around the basketball court etc without shoes on if you’re a high-level player.

I think what we can learn is that barefoot has plenty of benefits. It may not be for everyone because of the modern world but it definitely forces us to change the way we look at our feet and look after them. 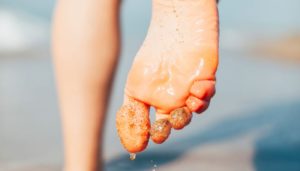