When suggesting Myofascial Dry Needling (MDN) to a patient, we often hear, “Oh is this the same as acupuncture?”. In fact, Acupuncture and MDN are similar, yet completely different!

Acupuncture derives from the ancient Chinese, and is thought to have been originated more than 5,300 years ago. Acupuncture is used to treat many different medical conditions, including, respiratory and nervous conditions, allergies and gastrointestinal disorders. When having an acupuncture treatment, the needles are inserted subtly and gently in specific acupuncture points of the body, mostly found along meridian lines. These lines are a specific representation of different organs. This type of treatment is generally relaxing, with the needles being retained for 15-30 minutes. 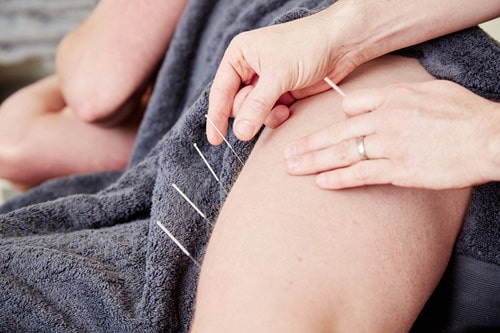 Myofascial Dry Needling, on the other hand, first originated in the 1930s from the work of Dr John Kellgren (Rheumatologist) who found that injecting a saline substance into muscles could produce a distinct pain referral pattern. The pressure associated with the injection, was found to relieve pain associated with that particular muscle and referral pattern. Later in that decade, Dr Janet Travell (Cardiologist) became extremely interested in Dr Kellgren’s work. Dr Travell questioned the use of saline, and instead found that the injection alone, without any additional substance, was enough to relieve the pain within the muscle, hence the term ‘dry needling’.

Myofascial Dry Needling is specifically used to relieve pain arising from muscle tissues and even myofascial tissue. When using this technique, needles are placed into trigger points, and/or taut bands of muscle tissue, for as quickly as 30 seconds or sometimes as long as ten minutes, depending on how quickly the muscles react. The aim of MDN is to release trigger points and access twitch responses, which decrease local muscle tone and decrease pain the muscle. It is a highly effective and usually painless technique.

See the table below for a comparison of the two techniques.